History
AHS was founded in 1956 by the Chinese-speaking congregations of the Anglican Diocese of Singapore. It was the only Anglican school in Singapore with Chinese as its medium of instruction. All others were English-medium schools.

The present "8-and-a-half mile" Upper Changi Road site was acquired, and on 15 March 1959, the new school's foundation stone was officially laid by the Archdeacon of Singapore, Ven. Dr. D. D. Chelliah. It was to be built with a new school facility with 16 classrooms, three science laboratories, an administration-cum-staff room, an assembly hall and a clock-tower. And finally on Jan 25, 1960, the new Anglican High school officially opened and blessed by the Bishop of Singapore, the Rt. Rev. H. W. Balnes.

The new school introduced a pre-university level (Pre-U 1 and 2), and was phased out in 1978 when Junior Colleges were introduced in Singapore. In 1979 AHS became a bilingual Special Assistance Plan school, and in 1995 the government awarded it Autonomous status, giving the school greater control over its affairs. In 2005 a new school building and the AHS Heritage Centre were officially opened by the Rt. Rev. John Chew, Bishop of Singapore. 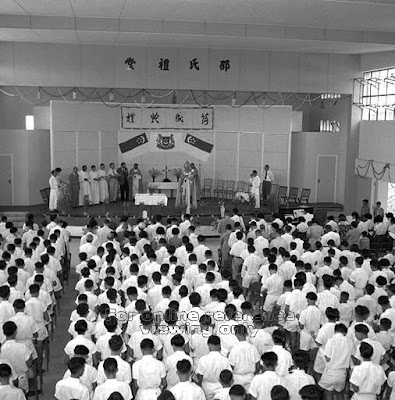 Posted by Singapore School Memories at 17:40